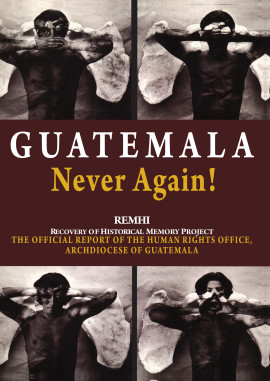 The Official Report of the Human Rights Office, Archdiocese of Guatemala

Available for the first time in English, this document presents the testimonies of the victims of Guatemala's 36 year long war. When Bishop Juan Gerardi, responsible for the Human Rights Office of the Archdiocese of Guatemala (ODHAG), released this study of human rights abuses in his country on April 24, 1998, he was murdered two days later. The ODHAG has since accused members of the Armed Forces of being responsible for the crime. This is the report of the Recovery of Historic Memory Project of Catholic Church. The 6500 personal testimonies which are the basis of the report were collected by 600 specially trained volunteers, and accounted for over 55,000 victims of the estimated 150,000 dead and disappeared during the conflict. Two thirds of the testimonies were collected in different Mayan languages. Twenty five per cent of the victims were children. Three quarters of all victims were indigenous. 422 massacres are documented. Responsiblity of 79.3 per cent of violence was identified as falling to the Army while the guerrillas account for 9.3 per cent of the violence recounted.