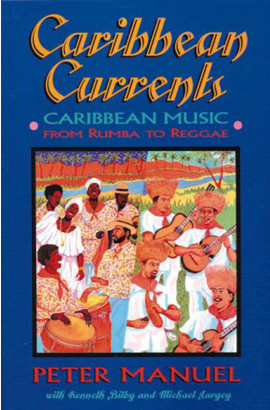 Caribbean Music from Rumba to Reggae

This is an exploration of the region's music - its forms and innovations, musicians, festivals, and dance halls, its fans - and traces its African, Asian and European roots. This book is oriented toward a few distinct yet overlapping sets of readers. One group contains the music lover who has taken a fancy to some kind of Caribbean music and would like to know more about the background of that style and about the region's music as a whole. Another set includes the student of Caribbean society or of pan-American society in general, who seeks an introduction to this most dynamic aspect of the hemisphere's culture.
Preface
Map
The Caribbean at a Glance
l. Introduction: The Caribbean Crucible
The Indian Heritage
The Mrkan Heritage
Patterns of Musical Retention
The European Heritage
Creolization
2. Cuba
A Day in Havana, 1986
The Cuban Crucible
Mrkan-derived Musks
Rumba
A Music Festival in Santiago de Cuba
European~derived Musks
The Son and Modern Cuban Dance Musk
"Socialism with Pachanga"
3. Puerto Rico
Cuba and Puerto Rico: 'The Two Wings of the Same Bird"
European-derived Musks
The Fiesta de Santiago Apostol at Loiza Aldea
Plena and Bomba in the Dance Hall
Music and the Puerto Rican Diaspora
4. Salsa and Beyond
The Son Sires a Son
Ruben Blades: The Cutting Edge
Style and Structure
The Salsa Life
Salsa Lite?
Latin Rap
Nueva Cancion
5. The Dominican Republic
The Emergence of Merengue
The Merengue Tipico of Cibao
The Merengue as National Symbol
The Modem Merengue
The Merengue Invasion
Merengue Style and Dance
Bachata: Songs of Bitterness
Juan Luis Guerra
6. Haiti and the French Caribbean
Music in the Streets ofPort-au-Prince
Haitian Cultural Crossroads
Creolization in Haiti: Language
Creolization in Haiti: Religion
Carnival and R.ara
Misik Twoubadou
Haitian Dance Music
Politics and the Haitian Diaspora
Vodou-Jazz Today
Music in the Lesser Antilles
7. Jamaica
1976: Traveling through Reggae's "Golden Era"
Music in a Downtown Style: Recording the Unrecorded Kumina in a Trench Town Style: One Thread Out of Many
Roots and Culture: Downtown Triumphant
Techno-Roots: From Reggae to Ragga
Coda: Rasta Kumina ina Raggamuffin Style
8. Trinidad, Calypso, and Carnival
The Development of Calypso and Carnival
Calypso in Colonialism
Modem Calypso and Carnival
Calypso and Gender
The Carnival Context
Steel Band
Calypso and Carnival outside Trinidad
9. The Other Caribbean
East Indians in the West Indies
Introducing the Popular Music of Suriname
Kmeko: Enter the Strings and Horns
Aleke: The Drum Rules Again
10. Five Themes in the Study of Caribbean Music
Unity and Diversity in a Continent of Islands
Race and Ethnicity
Music, Sex, and Sexism
Caribbean Music International
Music and Politics
Glossary
Notes
Index