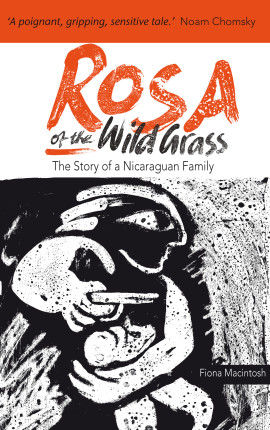 Rosa of the Wild Grass

The story of a Nicaraguan family

Rosa of the Wild Grass, the Story of a Nicaraguan Family is a true story which spans the last fifty years of the life of this small Central American republic. This fascinating and deeply moving personal and family chronicle brings alive the tumult of events in a way no textbook of contemporary politics could achieve.

Rosa and three generations of her family, especially her mother and her daughters, recall life under the Somoza dictatorship and the carnage of the insurrection which ended it; the hopes kindled by the Sandinista Revolution in 1979, and their eclipse by the destruction and cruelty of the Contra War; the subsequent years of neo-liberalism and the retreat from many of the social advances achieved; and the continuing battle to keep alive community spirit at home.

Rosa reveals the catholic church both progressive and conservative; evangelical groups; the beliefs in saints, witchcraft, and traditional remedies; literacy and health campaigns, land reform, and trade unions; military service and bereavement in war; unemployment and drug gangs; migration from countryside to city and back again, and abroad to Costa Rica and the US; wide-scale alcoholism and domestic violence; the strength of women’s networking, and their schemes for survival and co-operative ventures; and through it all the vital support of extended families.

Rosa is an excellent resource for students and teachers in the field of Latin America, gender politics, human rights and international development. More than that, it is a wonderful human story that will appeal to readers everywhere.

Rosa of the Wild Grass is dramatically visualized with stark illustrations painted by the author.

Find out more about this wonderful book - Watch the video or visit the dedicated website.

‘Through the eyes of Rosa and her family, we experience in intimate detail the dramatic years of Nicaragua’s triumphs and travail: the courageous struggle for freedom, the solidarity and idealism, the achievements and excitement about escape from suffering and submission, the cruel and bitter assault from abroad, defeat and betrayal, and still life goes on with its joys and sorrows, and the hope that never dies. A poignant, gripping, sensitive tale.’
Noam Chomsky

‘The Sandinista Revolution to the Ortega Presidency in today's Nicaragua revealed through an epic family struggle. This book shows how Nicaraguan people felt and lived the revolution and continued to fight for its original values. A wonderful read.’
Jenny Pearce, Professor of Latin American Politics, University of Bradford

‘The protagonists speak for themselves which the author faithfully documents and also adds her own responses through strong illustrations. Rosa of the Wild Grass is very readable. I would heartily recommend it to anyone wanting to learn more about the contribution of women to the Sandinista revolution and how it impacted on their lives.’
Marilyn Thomson, co-director Central America Women’s Network

‘This is a vivid and moving description of a small Latin American country’s great struggle to free itself from crushing poverty and oppression. All told in the words of the people who have lived this history, it is as gripping and fascinating as Oscar Lewis's La Vida. Equally interesting is how the book recounts the aftermath of this period and how the Nicaraguans retain the spirit of what the revolution taught them, despite their continuing battle for survival.’
Julie Christie, Actress

Fiona M. Macintosh
Fiona Macintosh became involved in human rights campaigning in the early 1970s and went to Nicaragua after the Sandinista revolution in 1979 to work for popular organizations primarily as a designer. Since then she has returned many times to record Rosa and her family. Today she lives in Scotland and is a writer and art psychotherapist.