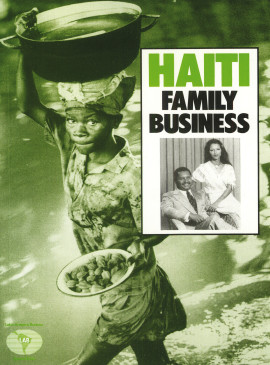 Almost 200 years ago, the Haitian people launched a revolution which ended slavery and established the world's first independent black republic. But it was a country 'born in ruins'. Once a source of plunder for the French colonial power, the national economy has since been a source of personal enrichment for a series of rapacious rulers. The most recent of these, 'Papa' and 'Baby Doc' Duvalier, have between them ruled Haiti for the last 30 years, turning the country into a virtual 'family business'. Repression, punctuated with occasional periods of liberalization, has sustained a social order in which an estimated 75 per cent of the rural population live on the edge of starvation.

Haiti: Family Business traces the historical orgins of the 'Duvalier system' and shows how and why it has survived until now. It examines the modern Haitian economy, the country's social structure and the role of the United States, for most of this century a key actor n Haitian political life. The book also looks at the forces for change in a country which has in recent years undergone some economic modernization and assesses the future prospects of the 'Duvalier system'.

Politics and Power in Haiti

The Macoutization of Haitian Politics

The Cholera Outbreak in Haiti: Where and How did it begin?

Anthropology, accountability, and the prevention of AIDS