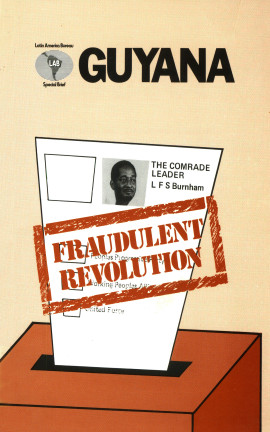 Guyana is on the verge of economic collapse and a profound social crisis. The socialist rhetoric of President Forbes Burnham's regime contrasts strikingly with the ugly details of his personalist and authoritarian rule. Burnham supports progressive third world views internationally, yet his party is responsible for the murder and harassment of its opponents at home. His policy to 'feed, clothe and house' the population has resulted in endemic food shortages, 40% unemployment and falling living standards for the great majority of people. Far from living up to the 'cooperative socialist' principles on which the PNC regime is supposedly based, Burnham's party has been responsible for massively rigging every election that has occured since the country gained independence.

Guyana: Fraudulent Revolution analyses these contradictions in the context of the country's history from its days as a slave colony, through the violent era that preceeded independence in the 1960s, to the present situation of economic collapse and political repression. It tells the story of the racial manipulation, violence and political fraud that have become the hallmarks of the Burnham regime.

Race and Class in the Postcolonial Caribbean

She Who Returned Home

The Military and the Politics of Change in Guyana