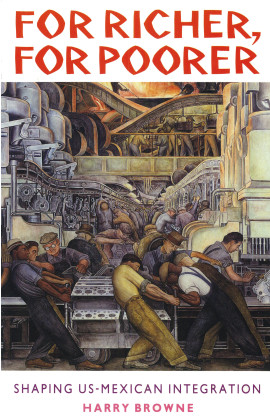 For Richer, For Poorer

Whatever the future of the North American Free Trade Agreement (NAFTA), the US and Mexico are involved in a rapid and unstoppable process of economic integration. Driven by the changing global production systems of US and other transnational corporations, the two countries' economies are now more closely intertwined than ever before. But NAFTA, with its business-first brand of integration, has been criticised as little more than a corporate bill of rights, allowing big corporations to take advantage of cheap labour and lax environmental regulation in Mexico, and to play one labour movement off against another. NAFTA has provoked an unprecedented level of public interest and criticism from a unique coalition of environmentalists, trade unionists and human rights activists.

For Richer, For Poorer explains the nuts and bolts of globalisation, and explores winners and losers in NAFTA-style free trade. It examines who opposed and supports NAFTA in the US and Mexico and looks at their arguments. The book outlines alternative strategies to promote a more balanced process of integration that protects workers' rights and the environment as well as business interests.

Harry Browne
Harry Browne is a research associate at the Inter-Hemispheric Education Resource Center. He is a co-author of The Great Divide: The Challenge of U.S. -Mexico Relations in the 1990s and of Runaway America: U.S. Jobs and Factories on the Move (Resource Center Press, 1993). He received his Master's of Pacific International Affairs from the Graduate School of International Relations and Pacific Studies at the University of California, San Diego.

Beth Sims
Beth Sims, a research associate at the Inter-Hemispheric Education Resource Center, is the author, co-author, or contributor to several books, including The Great Divide: The Challenge of U.S.Mexico Relations in the 1990s