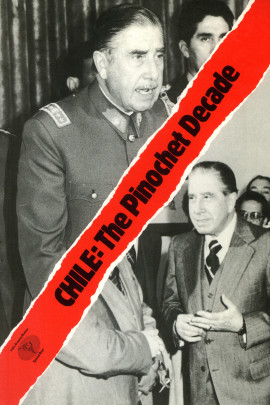 The Rise and Fall of the Chicago Boys

General Pinochet came to power in Chile in a coup which cost the lives of over 10,000 people. The coup brought to an end the socialist government of President Allende and inaugurated an experiment in monetarist economics which Time Magazine described as 'a model of what can be achieved in restructuring an ageing prostrate economy into a streamlined machine.' A decade later, the experiment collapsed and Chile entered the worst economic crisis in its history and Pinochet faced widespread opposition.

Chile: The Pinochet Decade tells the story of the rise and fall of the laissez-faire economic technocrats known as the Chicago Boys, who masterminded the experiment and analyses the nature of their alliance with General Pinochet. The book shows how the Chicago Boys promoteed a concept of 'economic liberty' based on the individual's right to compete in free markets. This could only be implemented through a state with vastly increased powers of repression and surveillance. In this way, manual and white collar workers and the rural and urban poor were forced to accept dramatic falls in their living standards which were a consequence of the model. For, the Chicago Boys presupposed a political and economic system, in which only the privileged few are actors and notions of social justice do not figure. Chile: The Pinochet Decade traces the failure of the model from the 'shock treatment' of 1975, in which the economy was massively contracted in order to reduce inflation, through the supposed miracle years of high growth funded by foreign loans, to the bankruptcy and final abandonment of the free market model.