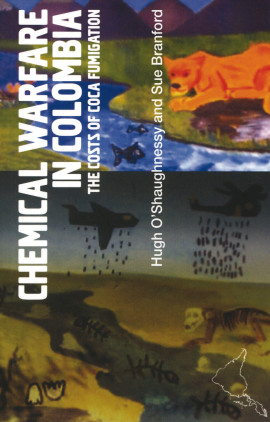 The Costs of Coca Fumigation

While the US wages the 'War on Terror' in the Middle East, it is conducting a terror campaign of its own closer to home. Chemical spraying is being used in Colombia as a deterrent and to destroy 'illicit' coca crops. But most people growing coca are poor campesinos with no alternatives to make a living. Whole towns, rivers, livestock and legitimate food crops have been sprayed and livelihoods destroyed by these US-administered fumigation programmes, backed by the Colombian state. Herbicides such as Glyphosate and Cosmo Flux are being used in high concentrations and sprayed from low-flying planes. The effects of heavy exposure to these chemicals on humans is still unknown. As O'Shaughnessy reveals, fumigation doesn't just harm people - farmers' livestock are being killed, and much of the area sprayed is rainforest - a fragile environment rich in diversity that is being poisoned by chemicals. This path-breaking book of investigative journalism lifts the veil on fumigation: why is it really happening, and who benefits? O'Shaughnessy travels to the Putumayo and Bolivar departments of Colombia, where most of the spraying takes place, talking to those affected. He draws a vivid and damning picture of a futile and indiscriminate chemical war, waged largely on the poor.

Another History of Violence