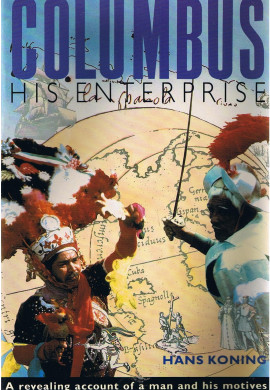 In "Columbus: His Enterprise", Hans Koning describes the personality and motivation of a man who changed the course of hisotry. Exploding the myth of the Great Navigator, the author reveals how Colombus accidentally found a continent and systematically pillaged its resources. This controversial book depicts a Columbus not only obsessed by gold but willing to endorse murder for it. 1992 marks the 500th anniversary of Columbus' arrival in the New World. To the indigenous peoples of Latin America the event is no cause for rejoicing. In an afterwood to "Columbus: His Enterprise", Domitila Chungara, the renowned Bolivian activist, laments "The invasion of our lands, the theft of our riches...the most horrific thing that they could ever do to our people".
A 1991 Introduction
1. The Enterprise of Columbus
2. The Case "Columbus"
3. The Selling of the Westward Passage
4. The Voyage
5. The Second Voyage
6. A New World
7. The Third Voyage
8. The Last Move
9. Closing the Ledger
10. Columbus Day
A Bibliography
An Interview with Domitila Chungara
Declaration from the CUC, Guatemala