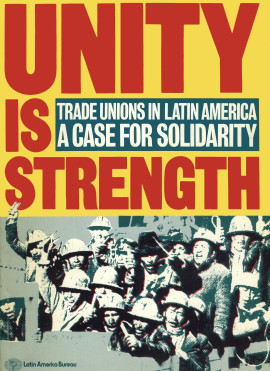 Trade unions in Latin America - a case for solidarity

Latin American workers and peasants live in extreme poverty, exploited by a global economic system which concentrates wealth and power in the hands of the multinational corporations and local capitalists at the expense of the mass of working people. In many Latin American countries this system is enforced by right wing military dictatorships of extreme brutality which imprison, torture and murder workers and suppress or take over trade unions. But despite this systematic onslaught, Latin American workers continue to fight back. In order to strengthen their struggle they are seeking international solidarity from their fellow workers in Britain and Europe many of whom work in the same industry or for the same company.
Unity is Strength is both a call for solidarity and an handbook. Part I describes the hardships and violence suffered by Latin American workers and exposes the economic and political system which exploits and oppresses them. It also looks at the nature of trade unions and workers' struggles in Latin America and considers the need for effective solidarity by British and European trade unionists united in a common struggle with their Latin American comrades. Part II provides a country-by-country guide to the background and present situation of the trade union movement in 25 Latin American and Caribbean countries.
Prelims - Unity is Strength (Title Page, Copyright Information, Contents, Acknowledgements, A Call for Solidarity, Map)
1. Unity is Strength