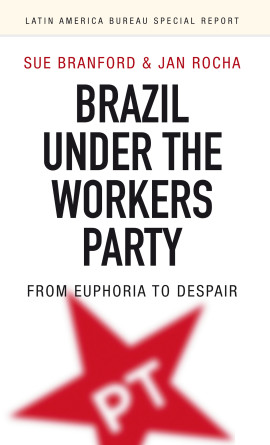 Brazil Under the Workers’ Party

From euphoria to despair

In 2002, after a long political struggle, Lula was elected Brazil’s first working class President amid huge expectations that he and the Workers’ Party (PT) would bring much-needed reform. A great deal was achieved, including a dramatic reduction in poverty. But, just months before the staging of the World Cup in 2014, a series of social protests swept across the country. In 2015 further demonstrations erupted, with insistent calls for the impeachment of Lula’s re-elected successor, President Dilma Rousseff, for corruption.

Brazil Under the Workers’ Party, the first serious look at what went right – and what went wrong – during the 12 years of Workers’ Party rule, tells a fascinating story of realpolitik, as Brazil’s first ethical party uses the old corrupt ways of Brazil’s dysfunctional political system to achieve real change and is then devoured by the political system it has failed to reform. An enthralling tale, of great significance for Latin America and the world, told by two experienced commentators on Brazil.

‘Branford and Rocha are amongst the most careful, committed and insightful analysts of Brazil and have followed the history of the PT from its origins. What they write here is of immense importance. They show that there is much to learn from the ambivalent and disappointing fate of a world-changing historical project. I recommend this book enthusiastically and strongly.’
Hilary Wainwright, founding editor, Red Pepper, Fellow of the Transnational Institute,writer on radical political parties and experiments in political transformation

‘This book offers a fresh and highly informative introduction to the history, achievements and limitations of the federal administrations led by the Workers’ Party (PT) in Brazil. Brazilian society and its economy have been transformed under Luís Inácio Lula da Silva and Dilma Rousseff. However, today the PT model is in crisis. Sue Branford and Jan Rocha explain better than anyone else why this is the case, and why it is important to reconstitute and relaunch the left in Brazil.’
Professor Alfredo Saad-Filho, SOAS, University of London

‘Sue Branford and Jan Rocha, brilliant chroniclers of Brazil’s recent history, explain in this alarming and riveting book the popular disenchantment that now faces the Workers’ Party, leaving the country vulnerable to the return of the right, and to the possible collapse not just of its left-wing government but of the “pink tide” in Latin America as a whole.’
Richard Gott, author of Hugo Chávez and the Bolivarian Revolution

‘Brazil under the Workers’ Party is hugely enlightening, a balanced but critical analysis of a tumultuous period. It manages to give a strong sense of the tendencies, movements, debates and dilemmas, while steering through their detail, to arrive at a sober and sobering appraisal of the PT’s record in government.’
David H. Treece, Camoens Professor of Portuguese, King’s College London

‘Sue Branford and Jan Rocha’s gutsy new book provides a succinct yet thoughtful contribution to a growing debate over Brazil’s Workers’ Party and its experience at the helm of four national governments since 2003. Two seasoned journalists, who know Brazil inside out, tell an effective story. Their tale, above all, captures the climate of angst, uncertainty and frustration among the Brazilian left, as President Dilma Rousseff enters her second term in office.’
Miguel Carter, Founding Director, DEMOS – Centro para la Democracia, la Creatividad y la Inclusión Social, Asunción

‘Branford and Rocha’s thoughtful study of the rise and fall of the Workers’ Party in Brazil should be required reading for all those seeking to understand the crisis facing social democratic parties the world over. The party’s rejection of agrarian reform, tax justice or structural political change lost it the support of Brazil’s powerful social movements, while its recent adoption of classic austerity policies has forfeited its very legitimacy. The authors’ conclusion is a compelling one: for left parties, transformative social and political change is the only hope of success.’
John Hilary, Executive Director, War on Want, author of The Poverty of Capitalism

‘This book is lively, imaginative and provocative. Not everyone will agree with its critique of recent PT governments, but it will spark debate about the recent political history and possible futures of Brazil.’
Professor Anthony Pereira, Director, King’s Brazil Institute, King’s College London

The Visible Nation: The Media Coverage of the June Journeys

Afro-Brazilian Resistance to Extractivism in the Bay of Aratu

Introduction: The June 2013 Protests and the Image of Brazil

The Programmatic Shifts in the PT’s Constitutionalist Agenda (1988–2013)