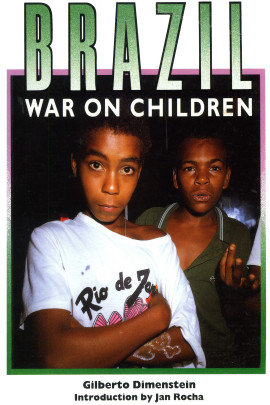 "Brazil: War on Children" is a journey through the underworld of Brazil's ten million street children. The author interweaves first-hand reportage, interviews and statistics to paint a picture of life for the children. He discovers a world of pimps, muggers, prostitutes and petty criminals; homeless children who live in fear of sudden death at the hands of the off-duty police and other vigilantes who make up Brazil's death squads. Dimenstein interviews the Church workers who risk becoming death squad targets themselves by befriending the children and trying to bring them hope. He also talks to the authorities who turn a blind eye, to the killers and to the children themselves. An introduction by Jan Rocha, the "Guardian"'s Brazil correspondent, shows how the children are just the most visible casualties of one of the most inequal societies in the world. It describes the impact of the policies of President Fernando Collor de Mello on Brazil's poor.
Glossary
Preface
Map
Introduction
Contents
'My life is like the wind'
2 'I killed you because you had no future'
3 Angels of death
4 Heroes or villains?
5 Supporting murder
6 The law of silence
Resources and Action
Index

Jan Rocha, Jan Rocha is a freelance reporter and wriiter and has worked for the BBC and The Guardian