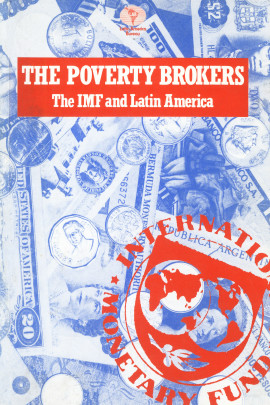 The international debt crisis which hit the headlines in September 1982 has underlined the power that is wielded by the International Monetary Fund. As the ultimate source of credit for heavily endebted Third World countries, it can impose onerous conditions on those nations that need its assistance. The burden of such conditions always falls most heavily on the poorest sectors of the population.
The Poverty Brokers rejects the IMF claim that these conditions are based purely on technical considerations. The IMF subscribes to a particular political and economic view of the world which refelects the priorities of the few Western nations that control it. This view favours those who stand to gain most from the unhindered operations and the international banks. By imposing such views on Third World debtor countries, the IMF in fact pepetuates the structures which sustain underdevelopment and poverty.
The Poverty Brokers explains the role of the IMF, examines how it works, who benefits from its operations and shows why it is crucial to the efforts of Western nations to resolve the present debt crisis. It analyses, through case studies of Peru, Jamaica and Chile, how previous IMF interventions have affected the poor and unerprivileged of the Third World. Finally, it examines proposals for reform of the IMF and the international financial system.